The Burj Al Arab: nine facts about the sail hotel in Dubai

The Burj Al Arab is considered one of the most luxurious hotels in the world: here are nine facts about it:

Welcome back on the interior design magazine FillYourHomeWithLove!

We often speak about wonderful places, emblems of good taste and the most refined design.

The hotels we present you are not only beautiful, but also landmarks in the world of luxury.

What we bring to your attention is always linked with innovation and celebration of high-end design, elegance and originality.

Today we are going to look at a very extraordinary place through nine facts. It is a dream place, from many points of view.

Known as the Sail hotel of Dubai, the Burj Al Arab is a real icon of architecture and project design.

The Burj Al Arab is part of the Jumeirah group, a luxury brand operating throughout the world.

Jumeirah is the name of the wonderful sandy beach surrounding the Burj Al Arab.

To get to the hotel you need to leave the beach and “dive” into the Persian Gulf, in order to reach the artificial island on which this architectural masterpiece is standing.

The island is linked to the mainland by a 280 meters long gangway.

This hotel was opened in 1999 and not only is the most photographed in the world, but it’s also the most expensive.

We put together nine facts about it that you probably didn’t know, and maybe you will find amusing.

Sail Hotel in Dubai: the mind behind the Burj Al Arab is architect Tom Wright

28 floors, 202 rooms, 8 restaurants, 321 meters high. Here are some numbers that convey the magnificence of this building.

Tom Wright, the architect who designed the sail hotel, is from the famous Atkins studio of London.

He was given a very important task: the hotel had to become the symbol of the Arab Emirates.

It had to represent the country. Wright took inspiration from the sail of the typical Arab boat, called “abra”.

Also the name of the hotel is symbolic: Burj Al Arab means “The Arabs’ Tower”. 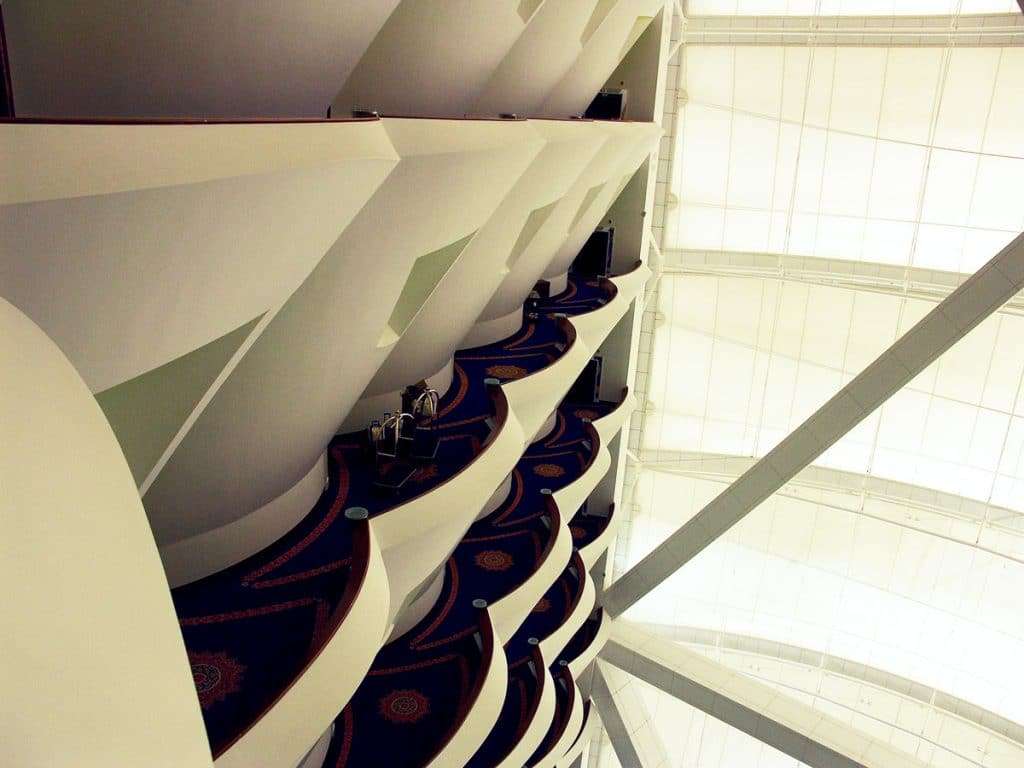 The beach is never under the hotel’s shadow

The architect put the hotel 280 meters far from the Jumeirah beach, and doing so, the great mass of the “sail” never project its shadow on the shore, at any time of the day.

Dubai’s sail hotel has five pools and a Spa

A huge spa on two floors, overlooking the ocean awaits you at the Burj Al Arab.

Five pools are scattered throughout the hotel, from the ground floor to the top floor solarium.

A simple double room is 170 square meters, the presidential suite is 768!

For the latter, €9000 are not enough for a night during low season.

Care and attentions for guests is total.

It starts with the welcome cocktail, then a special service for clothes arranging in the closets, 200 international newspapers and more than 130 tv channels in all languages.

Every suite has its own butler

On the Burj Al Arab website you can have a look at the many suites.

Among these, the family suite, with its 335 square meters, has two double bedrooms, of course overlooking the ocean.

There is also a huge bathroom and a living room with every comfort.

Little known fact, you can choose between nine different kinds of pillows, ranging from the Egyptian cotton to every type of ergonomic preference.

The bathroom is complete of jacuzzi and separate shower.

For every suite there is a person ready to assist you!

For security and privacy reasons, the access to the gangway connecting the hotel to the mainland is supervised by security guards.

The access is allowed only under the booking of a stay or a restaurant reservation.

One of the restaurants is built within an aquarium!

One of the eight restaurants is called Al Mahara, is located on the ground floor and it’s completely submerged in an aquarium.

There is no classificazione for the Sail Hotel: it’s a 7 stars hotel

The Burj Al Arab claims to be the most luxurious hotel in the world. Five stars are not enough to classify it.

You can buy a culinary experience involving all the restaurants from the ground floor to the Skyview Bar at the top!

If you can not stay one night at the Burj Al Arab, the gastronomic experience is surely a fascinating way to live the magic of this hotel.

There is the possibility to eat every course of lunch or dinner in each restaurant of the sail hotel.

Starting from the aperitif on the ground floor until the dessert on the rooftop bar.

What do you think?

Would you like to experience one of the many wonders of the “sail” hotel in Dubai?

For other articles about luxury hotels follow these links: