HOW TO CHOOSE THE TILES FOR YOUR KITCHEN AT CERSAIE 2017.

let’s start this week talking of a room quite dear to us women: the kitchen.

In particular, let’s see together how to choose the tiles and coatings suitable to any need, having a glance at all the new proposals that will be shown at Cersaie 2017.

Well then, September is coming, together with Cersaie 2017, the International Exhibition of Ceramics for Architecture and Furnishing. It will be precisely from 25th to 29th September at Bologna ‘s fair ground.

If you are going to renovate or build your house, I suggest you to pop over to there. You will find within reach all the innovations in this sector and, one stand after the other, you will see the styles in fashion this year and get an idea of all the novelties on the market. You will be able to choose among a country style like the one in the picture below, ore more modern ones.

Let’s go on in order:

Country-style kitchens are coming back into fashion and I suggest them above all, but non only, to those who have to furnish country houses. This mood is also suggested to couple with a typically modern style.

Try to imagine a country-style kitchen in an ultramodern city flat, in snow-white tones with steel at sight. I think it is undoubtedly an original, winning solution. I find the tiles you can see in the picture below perfect to couple with a kitchen of this kind. They are square-shaped and remind ‘rétro’ patterns.

As you can see, they are all different one from the other, either in patterns or in colours. 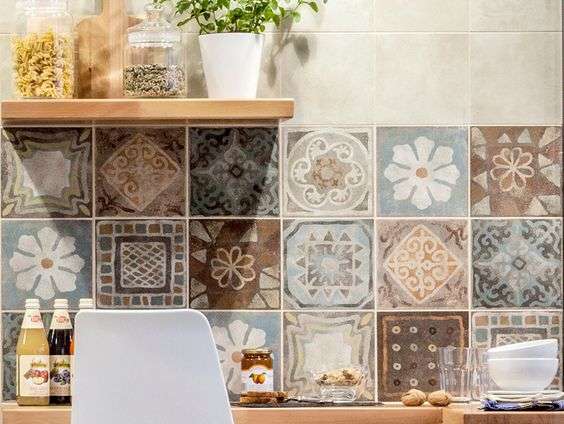 Previous articleThe Hotel Marriott Constantine ***** in Algeria and B Light.
Next articleIndustrial-style Accessories for your kitchen

Rak Ceramics at Cersaie 2019 in Bologna

Every year Cersaie, as well as the International Furniture Fair, it’s an inspirational source. I love to walk around the stands and...
Read more
Ceramic Tiles

Interior walls: wall coverings all to be discovered

Interior stone walls: let’s find out some of their peculiarities. Good morning friends and welcome back to my blog on furniture and...
Read more
No Category

Must have 2015: colors, wallpapers and more!

Wallpapers, colors and more... Good Morning! Today we will talk about 2015 trends and news! The reason why is that even the home...
Read more
kitchen furniture

We often have to furnish small flats, sometimes also with a single central room in which we need to put both kitchen...
Read more
Ceramic Tiles

Welcome back! Today I’m talking to you about an important trend regarding innovative coatings: the 3D tiles! Certainly, you have already had the...
Read more
Christmas home decor

Spa & Hotel thermae Esplanade Tergesteo ***** in Montegrotto Terme: the hotel from the point of view of design. “We are the tradition...
Read more